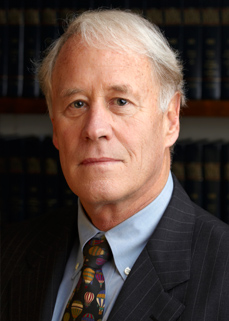 Christopher Mills joined Slover & Loftus in 1995 and was a member of the firm until 2015, when he assumed of-counsel status.  Prior to joining Slover & Loftus he spent over 25 years in the railroad industry, serving in the Law Department and the Energy (coal) Marketing Department at the Chicago and North Western Railway based in Chicago.  As a member of C&NW’s Law Department, Mr. Mills had the primary legal responsibility for the successful implementation of the railroad’s project to construct more than 100 miles of new railroad line to enable it to serve the Wyoming Powder River Basin which is the nation’s principal source of low-sulfur coal used in coal-fired power plants.  He played a major role in the negotiation of C&NW’s first rail transportation contracts for Powder River Basin coal.  He also led the negotiation of the first purchase-of-service agreement between a Chicago-area commuter railroad and the Illinois Regional Transportation Authority (now Chicago Metra), as well as the negotiation that led to C&NW’s first agreement with Amtrak following enactment of the Rail Passenger Service Act of 1970.

Mr. Mills spent the final six years of his career at C&NW on the business side as Assistant Vice President-Energy Marketing, where he was responsible for the marketing of C&NW/Union Pacific’s rail transportation service for Powder River Basin coal with primary emphasis on utilities located east of the Mississippi River.  His efforts ultimately led several users of Central Appalachian coal, including Southern Companies and Tennessee Valley Authority, to switch to PRB coal as the primary fuel source for a number of their power plants.  He continued to participate actively in contract negotiations between C&NW/Union Pacific and their coal customers.

Since joining Slover & Loftus Mr. Mills has represented a variety of rail shipper clients, including electric utilities and cooperatives, users of rail intermodal service, and shippers of chemicals and municipal solid waste.  He specializes in commercial negotiations with railroads on behalf of his clients and litigation before the Surface Transportation Board in rail rate cases, merger proceedings, rulemakings and other matters.  He also has considerable experience in alternative dispute resolution involving railroads and their customers.  He has represented several clients in arbitrations and mediations, served as a party-appointed arbitrator in contract disputes between railroads and their customers, and served as a neutral mediator in one dispute that was settled on the basis of his recommendations.

Obtained competition-preserving conditions for coal shippers in the Union Pacific-Southern Pacific and CSX-NS-Conrail merger proceedings at the STB.

Advised several clients in connection with successful rail line build-outs to enable them to obtain service from a second rail carrier.

United States Court of Appeals for the District of Columbia Circuit

United States Court of Appeals for the Sixth Circuit

United States Court of Appeals for the Seventh Circuit

United States District Court for the Northern District of Illinois

United States District Court for the District of Columbia

Published articles include “The Lake Geneva Line: A Case Study” in the Transportation Practitioners Journal (Vol. 52, No. 1, Fall 1984).